In a recent report by IDC (International Data Corporation), Indian manufacturers like Micromax and Karbonn are rapidly growing.

What’s more important to note is that these brands are thus narrowing the gap between the leading players like Samsung and Sony. Global companies are starting to realize this and hence shifting their focus to affordable segment as well.

Sony’s recent launch Xperia C is a full-packed device in terms of features at an economical pricing. Let’s take a look at what it is offering-

The Xperia C is a good choice for large screen enthusiasts as it flaunts a 5 inches TFT display with the qHD resolution of 960 x 540 pixels. This results to decent pixel density of approx. 220 ppi (pixel per inches).
Even though it’s a mid-range device, it shares Sony’s design language used in its high-end Smartphone’s. This omnibalance design approach gives the device a shining power button at the right side along with volume controls and dedicated camera button.

While, it is very sleek with thickness of 8.8 mm, the weight is little more than the usual at 158g. The usual ports like micro USB for charging and earphones jack is available at the left and top respectively.

Like all Xperia devices, there’s no physical navigation button, as it has virtual buttons. Back of the device has a rear camera and speaker grille. It’s available in vibrant hues like White, Black and Purple. 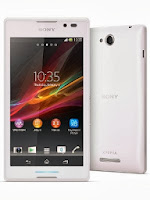 Interestingly, to keep the prices of the device down, this is the first Smartphone from Sony which houses a MediaTek processor.

This is the same quad-core processor clocked at 1.2 GHz, which also powers the homegrown manufacturers’ devices. The processor is complemented by a gigabyte of RAM which should be sufficient for most of tasks and even games.

It has storage capacity of 4 GB internally, and supports microSD card of up to 32 GB. The device is fueled by a Li-ion battery of 2390 mAh.

It has several useful features such as autofocus, geo-tagging, panorama, etc. For video chatting purposes, the device also has a VGA camera at the front.
Sony Xperia C offers all the usual connectivity options with network support for 2G and 3G, Bluetooth 4.0, Wi-Fi, DLNA and GPS. The device has a dual SIM support, with dual standby feature.
Is it worth it?

Is it worth it?

Sony Xperia C will be competing against Samsung Galaxy Grand as well as slew of devices from the likes of Micromax and Xolo.

The Grand is almost a year old and if one is looking to go with a branded device,  then the Xperia C offers everything one may want from a device of this range.

Why Project Management is for Everyone (Infographics)