60% of smartphones are being built or have the Android OS running on them. This is what prompted me to getting this piece together as it would be beneficial if we do not just use the No. 1 Operating System for phones, but also know a little of how it came about. (History of Android )

About Android – The Invention Story

Android (from its former owner Android, Inc.) is a mobile operating system (OS) currently developed by Google, based on the Linux kernel and designed primarily for touchscreen mobile devices such as smartphones and tablets. Android’s user interface is mainly based on direct manipulation, using touch gestures that loosely correspond to real-world actions, such as swiping, tapping and pinching, to manipulate on-screen objects, along with a virtual keyboard for text input. In addition to touchscreen devices, Google has further developed Android TV for televisions, Android Auto for cars, and Android Wear for wrist watches, each with a specialized user interface. Variants of Android are also used on notebooks, game consoles, digital cameras, and other electronics. Born on the was born on November 5, 2007, Android has proved itself to be No. 1 for mobile devices
Since 2013, Android is the best selling on tablets; and on smartphones the OS is dominant,thereby giving it the largest installed base of all operating systems of any kind. Just like many other Startup stories, the Android OS started small and it was surely a gradual process to get to the position they are today. I would be showing you a little repository of how they got to where they are.

Android had some alphas and betas for T-Mobile’s G1 before this release, but cupcake was its first confectionary-named operating system. We got lots of fun stuff in this update, including support for third-party virtual keyboards (oh yeah, no more hardware keys!) and the ability to upload videos and photos to YouTube and Picasa. Oh, and it also got widgets!

Cupcake made the T-Mobile’s G1 something to behold (at least for 2009), but this was just a humble beginning. Android had tons of work to do. 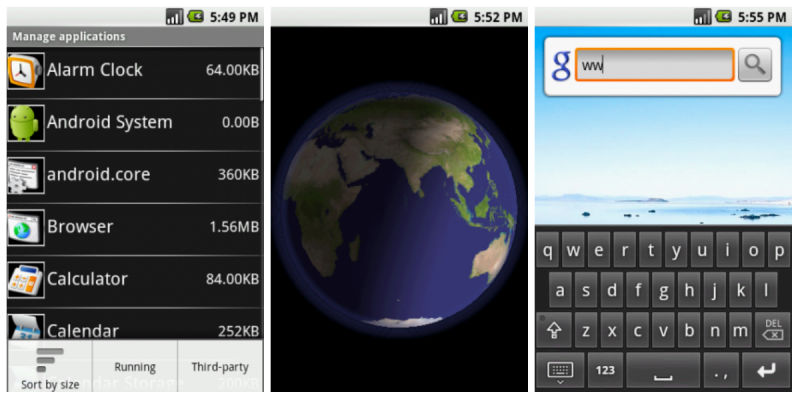 Android Donut was the OS that started making others forsake their Palm Pres and started taking Android more seriously. This update brought along universal search, text-to-speech superpowers and CDMA compatibility (hello, Verizon).
The update began pushing out to all possible handsets on October 1, 2009. 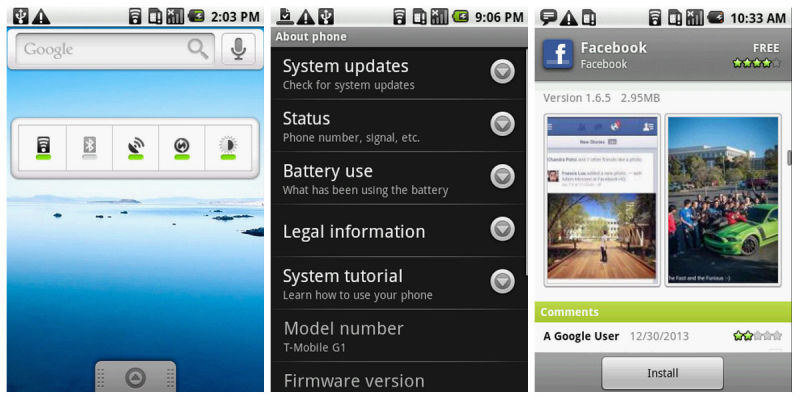 With Froyo, it was all about speed. Gizmodo’s Matt Buchanan had this to say about the new Android update:

The speed boost in 2.2 is fantastic, but what makes Froyo a truly great update is that it tightens bolts all across the entire platform. Android has evolved into a real product, on a totally different level than its first year….Android 2.2 is the first version of Android that feels totally complete—it performs like it should and it has most of the features it should. It’s not quite at the point my mother could use it without a precarious learning curve, but you can see how it’s going to get better. It’s safe to say that with Froyo, Android has become something that most people really can use—and love.

The design was still a little clunky compared to the more streamlined and elegant competition, but simple things like adding a bottom dock for quick access to the dialer and app drawer started showing how Android was making a slow crawl toward user friendliness. 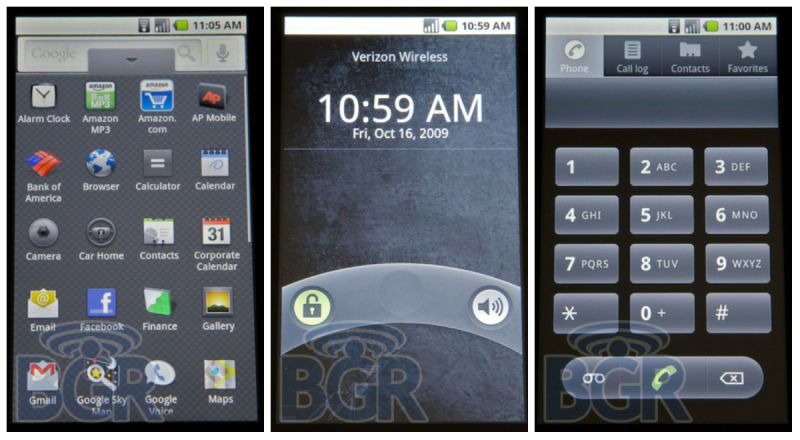 Where the last few updates had been all about function, Google finally took a moment to look at form in late 2010. The user interface was overhauled with a darker theme that also continued Android’s speed uptick. But that didn’t mean new features completely disappeared. Android added support for NFC, the super useful download manager, and even simple things like improved copy and paste.
Unfortunately, this was when software skinning was in full swing and stock Android began to recede into the background. Only a handful of handsets, like the Google Nexus S, the Nexus One, and the T-Mobile G2, even saw these changes as designed above. 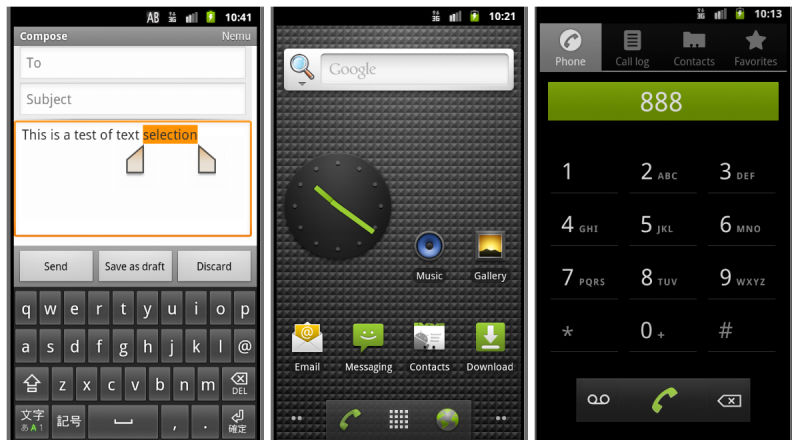 Honeycomb primarily focused on one thing and one thing only—tablets. The iPad released only months earlier in the fall of 2010, and Android needed an OS that could compete in a bigger form factor not fit for your pocket. This included what Google called a “Holographic” interface and a more intuitive keyboard for bigger devices. 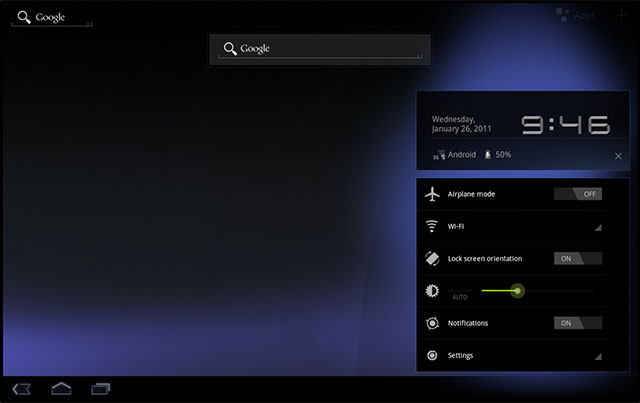 ICS reoriented toward the mobile phone with an updated interface and the complete dissolution of hardware buttons. This means we finally got the actions bar and the ever-important recent apps button (how did we ever live without it?!). The design was really a merger of Android’s tablet OS (Honeycomb) and the mobile OS (Gingerbread, Froyo, et al). Apps were more powerful, multitasking was now front and center, and you could start to really see the computer-class power that were being packed inside smartphones. In fact, we were so impressed that we called it “Android’s most significant upgrade to date.”
The modern Android was coming together. 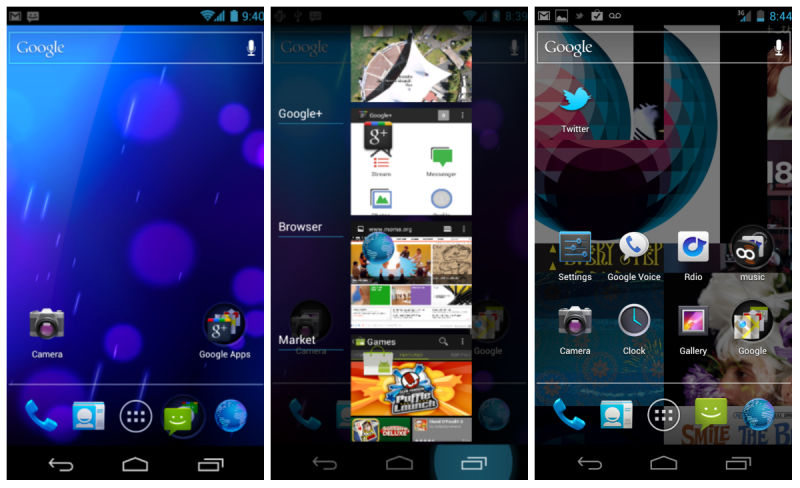 GOOGLE NOW! Seriously, it’s my favorite feature of Android and was the release where I started looking at my iPhone 3GS with disdain. Jellybean had a super-improved voice assistant when searching and notifications finally didn’t suck, offering much more context from the drop-down menu.
The homescreen also got revamped because now widgets could be resized and placed anywhere. Android was more customizable and powerful than ever. 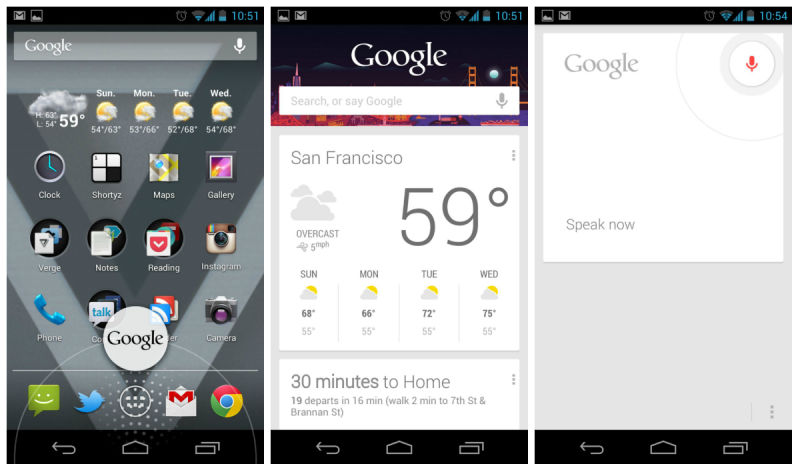 It would be more than a year until Android moved on to its next big release (though Jellybean was continuously upgraded up until the summer of 2013) and launched its KitKat update with the Nexus 5 on Halloween in 2013. Google Now was now better than ever with some prescient abilities that tried to guess what users wanted before they even asked, and Hangouts was upgraded with some much-needed SMS capabilities.
Most importantly, KitKat slimmed down the OS’s footprint, meaning devices with only 512MB of RAM could run the OS smoothly. This came in handy for Android’s push into cheaper phone markets with its Android One program. 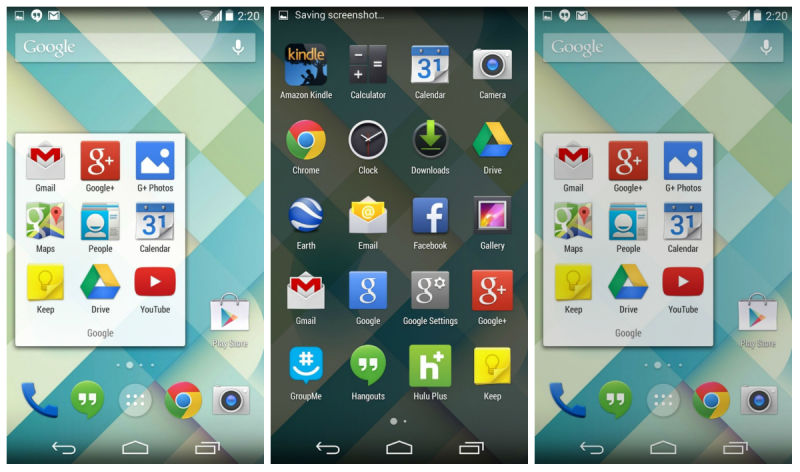 Hello Lollipop and hello modern Android. Lollipop’s biggest claim to fame was its dramatic reimagining of the Android operating system that started all the way back with Ice Cream Sandwich. Icons, animations, and the multitasking menu were completely redone with Google’s Material Design approach, and the Android lockscreen became much more useful with better notification integration. Google continued opening up Google Now to third-party developers and thankfully added “silent mode” back in for notifications.
This was the the design future for Android, and one that Google continues today. 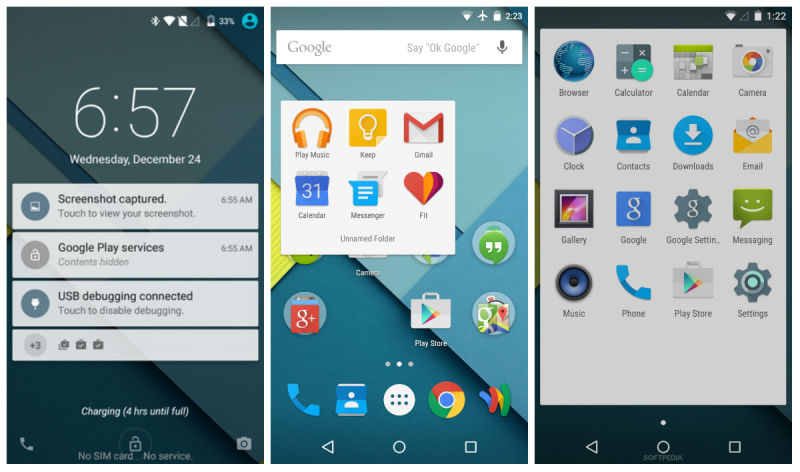 Yes, This is it.. The Latest and coolest,which is all about maintenance and not so much a makeover. But it does come with some awesome additions, including a new way of handling app permissions, a new and improved Google Now, and official fingerprint sensor support. Google’s also improved battery life with Doze and bundling in the Android Sensor Hub in its latest Nexus smartphones, meaning you should be able to survive the day without needing to pull out a charging cable.
Credits:
Gizmodo
Wikipedia

Google Wants to Change the Way We Play Google Games